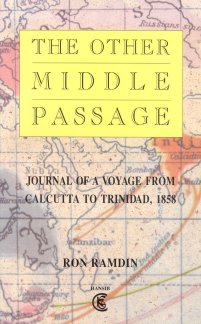 In the wake of the African slavers there followed the ‘Coolie ships’ from India, carrying Indian indentured labourers to replace African slaves on the colonial plantations after emancipation. With the first shipment of indentured Indians to Guyana in 1838 a new system of slavery was introduced and between then and 1917 more than half a million Indians were transported to the Caribbean. This traffic formed part of the wider dispersal of Indian labour to an ever-expanding Indian diaspora which included Malaysia, Fiji, Natal (South Africa), Kenya and Uganda (east Africa) and the Seychelles.

During the early years of this migration to the Caribbean, voyages undertaken in relatively small ships were long and hazardous, especially in the 1850s – one of the most disastrous periods of mortality. It was during this decade that the Journal of the Captain of the Salsette was written, an evocation of the stark terror that overshadowed the entire voyage lasting 108 days. At this time of major migrations worldwide the Indian labour migrants were thew victims of much injustice and in the words of the Captain’s wife, Jane Swinton, ‘Why have one law for our Indian emigrants to the West Indian colonies and another for our English emigrants to Australia?’

An audience at the TUC with Ron Ramdin (with Roger Mackenzie)